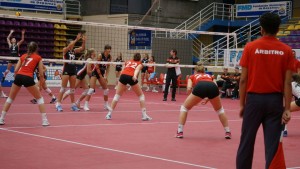 Belgium and Netherlands remain unbeaten after the third day of competition, with Germany as primary alternative for win the WEVZA U18 Women Championship in Valladolid. German and Belgium routed Portugal and Switzerland in three sets, meanwhile the Dutch edging past France in a thrilling 3:1.

The programme of the third competition day in Valladolid started with Germany bouncing back from yesterday’s loss to cruise to a 3:0 win over Portugal (25-16/25-15/25-15). German girls stroke hardly from the beginning to get a great advantage. The efficiency in attack of Celine Jebens and the six blocks of Leandra Negri prevented the comeback of Portuguese.

Netherlands won an exciting match against France (25-22/23-25/20-25/16-25). Dutch gave up their first set of the tournament in a good performance of the team trained by Fabrice Vial. Netherlands reduced their errors to comeback and control the rest of the game with the 20 points of Nicole Van de Vosse.

Belgium led the standings after a great win over Switzerland (25-11/25-20/25-19). Belgium set the pace of the game from start to end. Swiss girls tried to react in the second and third set but the good serve from Belgian side, and their own errors brought the match to an end in straight sets.