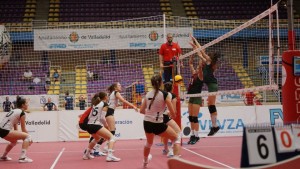 Belgium or Netherlands, one of them will be the best at the WEVZA U18 Women Championship held in Valladolid. Belgian and Dutch remain unbeaten until the last day and clash together in a match for the title, after the tough victories over France and Germany. Portugal achieved their first victory of the tournament edging past Switzerland.

Portugal claim the first victory of the tournament over Switzerland (25-16/25-27/25-17/25-12). The Portuguese players were more focused in their objective in the first set. Swiss responded with a great performance to equal the game, but the team trained by Rui Pedro Silva restarted their engines with impressive offence play to conquer a much desired victory.

Belgium overpowered France in a five-set thriller 2-3 (15-25/25-20/25-23/21-25/14-16) to remain unbeaten. The Belgian took full command of the game in the first set with impressive attacks. French dominated the second and third set with the 20 points of Ratahiry and the overall performance of Schalk. The Belgian extending the match to the tiebreak, committing fewer mistakes and the outstanding Eline Van Elsen, who scored 28 points to lead her team to the victory.

Netherlands beat Germany in a exciting match 3:1 (27-25/18-25/25-18/25-22). The Dutch climbed to the first step of the standing with a closely contested starting set. German showed more intensity to equal the game but they could not complete the comeback. Netherlands improved their performance to dominate the scene to claim the victory, and secure the “clash of titans” for the title of the WEVZA U18 Women Championship in the last match against Belgium.