Four favorites for the 2 spots in the finals 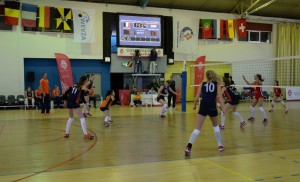 The WEVZA U-16 Women Tournament it’s going strong. Tomorrow it will be played decisive matches to the ranking of both pools: Netherlands x Switzerland, for the winner of Pool A and Spain x Germany, regarding Pool B. Having in consideration today’s matches there are four teams for the two finalist spots.

Today Germany won without major difficulties (3-: 25-12, 25-18, 25-22) against a somewhat different Portuguese team from yesterday’s match against Spain. Even though they add two wins to consolidate the 1st place in the pool Germany must win tomorrow against Spain, that it’s also undefeated. Jens Tietbohl, Germany coach said “It wasn’t a good match from our team. Portugal served well and created many problems for us in the reception. Tomorrow against Spain, it will be a much more interesting match, but obviously that we hope to win”. Spain and France match was as expected from two teams with similar value and equally spirited. The Spaniards entered breathing confidence and never deviated from the path to the victory: 3-0 (27-25, 25-22, 25-18). In the end Spain captain Raquel Montoro said “I think that we already showed that we have value to be the first in our pool, since we have a good team, we don’t give up fighting and play most of the time at the same level, always giving 100% of ourselves. I don’t believe that there are favourits in this tournament, but Netherlands seams to be the strongest team”.
In Pool A the expectations are on the match between Netherlands and Switzerland which will decide the winner of this pool. Switzerland that won today against Portugal B by 3-1 (25-12, 23-25, 25-20, 25-15) add to wins and play with confidence even if they give the favouritism to their opponents. Annick Stahli, SUI wing-spiker “Netherlands is the favourite, has a good team and strong players, but we believe that we can beat them if we play well in the attack and pressure them. We have two wins in two matches and we’re playing well so that give us even more confidence”. Netherlands on the other hand lost by 2-3 (15-25, 25-15, 15-25, 25-21, 19-21) with Belgium, a team that never gives up. In the end of this “marathon” Robbin de Bont, Belgium’s coach acknowledge: “It was effectively a crazy match, played very intensely, between two very young teams. We won well the sets and Netherlands did the same. In the decisive set, there was much nervous in the mix and either team could have won. We defeated a very strong team such as Netherlands and we are very pleased, but our main goal is to evolve as a team”.

All the information about the U16 Women WEVZA Tournament at http://fpvoleibol.pt/wevza-u16fem/ and the broadcast of all the matches live and exclusive at www.volei.tv