Italy, Germany and the Netherlands victorious on opening day of WEVZA #EuroVolleyU17W qualifier

Viana do Castelo, Portugal, January 7, 2020. The WEVZA qualifier for this year’s U17 Women’s European Championship started on Tuesday in Viana do Castelo with Italy, Germany and the Netherlands edging Belgium, France and Spain only at the end of very closely fought matches. The eventual winners of the tournament will secure their participation in the Final Round due to take place later this year in Montenegro.

Unsettled by the fact that they were playing the silver medal winners from last year’s U16 European Championship, Belgium started the match with much determination and displayed a very strong serve, thus deservedly taking the first couple of sets. After that, the Italians regrouped and eventually emerged victorious from a match that might have ended Belgium’s way.
Belgium’s Eline Van Elsen (22) and Italy’s Sara Bellia (21) were the best scorers of the match.

Michele Fanni, Italy coach: “It was a good win, but we did not play a good match. Belgium is strong, especially their serve is good, and they created many difficulties to our receivers. We were able to turn to match in our favour and kept growing throughout the match. We need more time together because we have not trained enough. We hope to grow even more during the tournament, which features very high-level teams like the Netherlands. The teams have evolved since the last edition and it will be a very competitive tournament.”

A match between two teams with very different physical characteristics and ways of playing began in a balanced way. Germany, with the tallest and strongest players in their ranks, initially had a hard time dealing with the solid French defence game, but eventually relied on aggressive serves and attacks as a way of putting pressure on their opponents. They broke down France’s strong resistance in the third set, eventually securing a 3-1 victory. Germany’s Celine Jebens, with 20 points, and France’s Lilou Ratahiry, with 16, were the best scorers of the match.

Jens Tietböhl, Germany coach: “It is very good for us to start with a win. This pool features very strong teams like Italy and Belgium. France has a good team as well. Tomorrow against Belgium we will have a much more difficult match.” 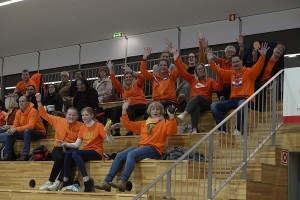 In a match attended by the Portuguese Minister of Education, Tiago Brandão Rodrigues and the Mayor of Viana do Castelo, Jose Maria Cunha Costa, the Netherlands had to mobilise all of their energy to live up to their status as pre-favourites and edge a spirited Spanish team.

Eelco Beijl, coach of the Netherlands: “It could not have gone any better. We started the tournament with a victory and we did it against a very combative team, playing with a lot of strength and energy, which put us under pressure and caused us some nervousness. It was good to go through it, fight and take control of the match. It reminds us that we have our goal, but to achieve it we have to fight and play our game. It is great to see that the teams that are here have evolved a lot in the space of six months to a year only. It is very good news for Volleyball.”