Viana do Castelo, Portugal, January 8, 2020. On Wednesday, Italy recorded their second victory in as many matches at the WEVZA qualifier for this year’s U17 Women European Championship, as they routed France in straight sets. Belgium needed three sets only as well to claim their first win in the competition against Germany while the debut of hosts Portugal ended in a 2-3 loss at the hands of Spain after dissipating a 2-0 lead. The eventual winners of the tournament will book their spot in the Final Round due to take place later this summer in Montenegro. 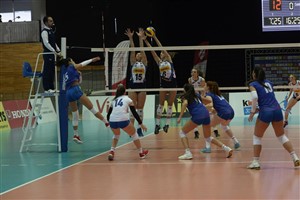 Italy started the match determined to settle things in their favour from the very beginning. The aggressiveness (and efficacy) of their serves destabilised the French reception and the power of the attacks by Sara Bellia, Greta Catania and Manuela Ribechi made sure that France could not pose a real threat to the ‘Azzurrine’. Sara Bellia, with 17 points, and Manuela Ribechi, with 13, and France’s Lilou Ratahiry, with 13 as well, were the best scorers of the match.

Michele Fanni, Italy coach: “Today we were more aggressive with our serve and it is always easier to play your game when the ball flies high on the opposite side of the net. I am happy because we have improved in reception and defence – and when it comes to our attack, we have at times been able to show our true power. We have made two steps forward and the third is tomorrow, against Germany, a strong and well-organised team. Our goal is to improve serve, defence and attack as this tournament is instrumental to continue with our development.” 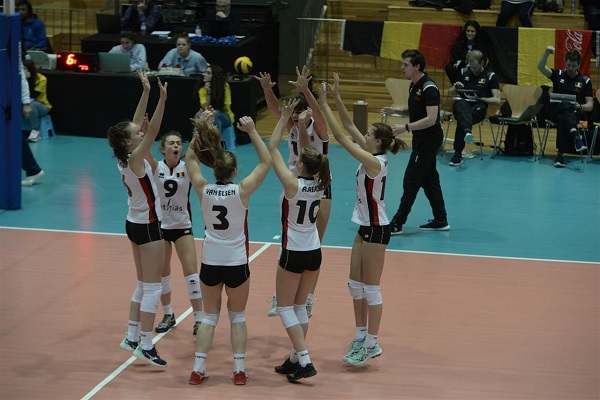 The first set was atypical, with Belgium making many mistakes not seen in their match the day before against Italy. However, with Julie Alaerts standing behind the service line, Robin De Bont’s team turned a 12-17 heavy deficit into a more balanced 16-17 result. It was a close fight until the end, with the Belgians taking advantage of a short ‘blackout’ of the Germans to close the set by 26-24. This outcome affected Germany’s performance and boosted Belgium’s morale, leading the young Yellow Tigers to a 3-0 triumph.

Eline Van Elsen and Anna Koulberg from Belgium, both with 13 points, were the best scorers of the match.

Robin De Bont, Belgium coach: “The first set was the key to the match. We were always trailing but we did not give up and we fought for the victory. That is the essence of this team: we always fight until the end. The end of the first set was like a lottery where either team could win… Now we will have an hour of rest and then we will start preparing for the match with France. We have had a good start to the tournament but we need to win again tomorrow.” 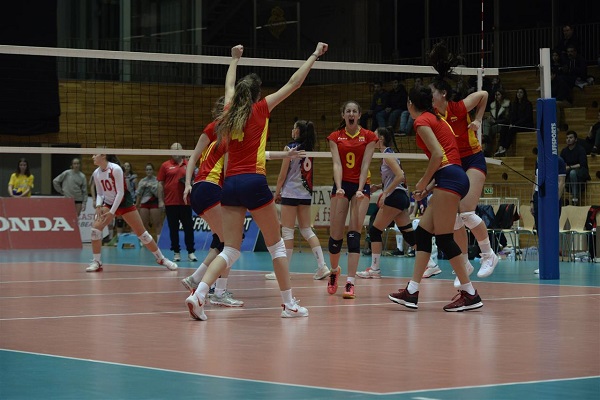 In a long-awaited match, especially given the Iberian rivalry, Portugal started very well, but Spain’s reaction was overwhelming. The team led by Rui Pedro Silva was not frightened. The hosts settled their game and evened the score. Driven by the large and enthusiastic home crowd, Portugal headed unstoppable for a 25-20 win. Moralised, aggressive in the serve and attack and effective defensively, the Portuguese recorded another triumph in the second set: 25-21.
When all seemed decided, the third and fourth sets turned into a show by the Spaniards. In the decisive set, Julia de Paula Viana delivered a terrific performance and Spain eventually sealed the victory with a landslide 15-7.

De Paula Viana, with 29 points, was the best scorer of the match and Ana Monteiro, with 13, the most prolific player of the Portuguese team.

Jorge Barrero, coach of Spain: “At this age it is very difficult to maintain the same level of play for the whole match. If they were seniors, Portugal would probably have won 3-0, but after starting the match serving strong and defending very well, they eventually lowered their defensive pace and we took advantage of that to score points with our serve and attack. The fifth set is always a lottery, but we kept the pace and achieved a good win.”

Rui Pedro Silva, coach of Portugal: “They are very young players and at an age when the psychological factor is very important and weighs heavily on the decisions they take. At times, we could already show the work we are developing and that we are becoming competitive. As we always lose in terms of height to our opponents, we have to capitalise on our strengths. Spain has also created difficulties for the Dutch and we will have to fight to do the same.”