Italy is the first Champion of WEVZA Girls Tournament. The Italian squad beat Germany in the Final match and won the Gold Medal in the first edition of the girls competition of the Zonal Association of Western Europe. Belgium earned the third position of the podium of the spectacular tournament celebrated in Swiss city of Schaffhaussen. 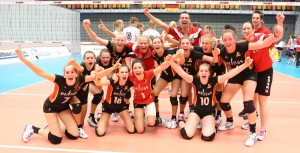 Belgium earned the Bronze Medal in the competition after starring in a sensational Final 3-4 match. Belgic team beat The Netherlands in a extremely disputed clash that could only be resolved in a heart-breaking tie-break. The neighboring countries engaged in a disputed clash for the third position, characterized by the continuos alternatives that ended in the hands of Yellow Tigers.

The Dutch side soon took the lead in the first period. Young Oranje players maintained their mistakes to a minimum in the  set, thus situating the 25: 21 that put them in the lead of the game. However, Belgium produced a sensational reaction and clearly subdued its rivals in the second period. The Netherlands only managed to see how Yellow Tigers gave no options to their rivals, so to achieve a convincing 13:25 that returned the tie to the match.

With 1:1 in the scoreboard, the game turned absolutely equalized. Both teams engaged in a sensational demonstration of great performances, and none of the squads allowed its rivals to take the lead in the game. Being that so, the tie persisted throughout the third set and the period offered no hint of resolution. Ultimately, Belgium used its offensive power to put the heart-wrenching 28-30.

After such disputed set, Belgium used the momentum to take the lead in the fourth period 13:16. Nonetheless, the Dutch squad reacted, recovered the difference and was able to put a step forward towards victory with a sensational end of period. 25:23 and the tie appeared again in the scoreboard, as the match transitioned to the tie-break.

The fifth set was just as exciting and disputed as the rest of the match. The equality seemed unbreakable and the tie persisted until the end of the period. In a sensational finale, Belgium had luck of its side and achieved a 14-16 that represented the decisive 2:3 and the Bronze Medal.

Italy won the Gold Medal at the 2014 WEVZA Girls Tournament celebrated in Schaffhausen after beating Germany 3:0 in a disputed Final. The fight for Gold was as exciting as the rest of the tournament. Both finalists stated their conditions of the best teams of the competition in a struggle for the top position in the podium, through outstanding actions. The first set was resolved in an disputed end that went to Italians hands 27:25 after keeping the level of play in the decisive points of the period.

The tie persisted in the second set, as Germany and Italy engaged in a continuos exchange of spectacular offensive and defensive actions. Nonetheless, with 19-18 in the scoreboard, Italian players managed to achieve a sensational run of +4 that was key to give azzurrini the 25:20 and 2:0.

A starting 8:3 in the third period gave Italy the lead in the set. Germany fought hard, trying to stop rivals’ efficiency and searching an opportunity in the game. Hence, German girls managed to keep the distances in the scoreboard to a minimum.  Despite Germans’ attempt, though, Italy was able to maintain a slight edge in the set, with two or three points ahead in the scoreboard; Germany tried and tried but young azzurrini gave no signs of doubt and ultimately acquired the 25:20 that helped them to claim the Gold Medal.

With Italy on top of podium, the first edition of WEVZA Girls Tournament came to an end. The exciting competition celebrated in Schaffhausen has presented the under 17 competitions of the Zonal Association and has showed the outstanding level of teams of the eight members.