Netherlands will face Germany in the final 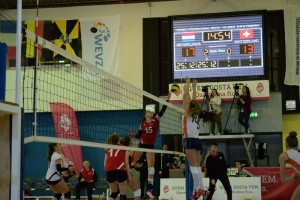 Netherlands will face Germany in the final of the WEVZA U16 Women Tournament that is scheduled for 20h00 on Friday. A match to watch and that places face to face the teams that were in the beginning the favourites. It remains to be known which will be the strongest.

The match between Netherlands and Switzerland didn’t correspond to the expectations since Netherlands didn’t gave the slight chance to Switzerland to fight for the victory from the first minutes of the match, and took a spot in the final of the tournament. The victory somewhat heavy (3-0: 25-12, 25-12, 25-21) rewards the flawless match of the “mechanic orange” and punishes the lack of solutions from Switzerland. Eelco Beul, the Dutch coach said “Switzerland demonstrated in the first two matches that they were a strong opponent, with a good setter and effective wing-spikers, but we have been trying to improve what didn’t go so well in the first two matches and today we played a very good match, within what we know our team is capable of. Our goal is to improve each match and to obviously win the tournament, even if we’re expecting a strong team to join us in the final. If it’s Germany they’re a very structure team, aggressive and powerful, if it’s Spain, we’ll face very skilled players and with warrior spirit”.
In the second match of Pool A Belgium won against Portugal by 3-0 (25-20, 25-10, 25-19) and secured the 3rd place in the pool. In the end Belgium coach said “It wasn’t such an easy match we the result appears, since we had to play always focused, when we didn’t Portugal tookd advantage to add points. So far, we only have to lament the less achieved match that was the first, once that yesterday we played at high level facing Netherlands and today we’re also at our level. It was too bad because if we played better against Switzerland, we could be fighting tomorrow by a medal”. Belgium’s opponent will be France that defeated Portugal by 3-1 (22-25, 25-23, 27-25, 25-15) in the fight for the third place in Pool B. in the fourth set, and with Julie Henyo serving France went from a tie at 8-pts to a large advantage (17-8), that was decisive to win the set and match. For Phillipe Marta, the French coach the difference was realy “in the serve, since ours was superior to Portugal’s, and also the determination with which my players faced this match. Tomorrow against Belgium it will be a very good match to us because it’s with these matches that we may grow as a team and prepare better the European Qualification”. Spain vs Germany was the last match of the day and it was very balanced (2-3: 20-25, 25-12, 21-25, 26-24, 10-15I but Germany showed more calm in the decisive moments and won fairly, assuming as a worthy opponent to Netherlands. In the end Paula Schurholz, Germany’s captain highlighted “We saw Spain’s first two matches in this tournament and we knew that we were going to have difficulties to win, but we serve very well, and mainly we played always united as a team, especially in the most adverse times. Tomorrow all may happen. Netherlands has good players and it’s going to be very difficult. It’s true that we already played against them two times and lost, but tomorrow we are going to the court determinate in conquering this good level tournament”.