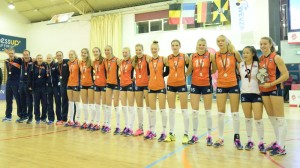 The match that would rank the 7th and 8th place was played by Portugal B and Portugal A, the strongest team made value of their favoritism wining by 3-0 (25-20, 25-15, 25-17), after a uneven start when they were losing by 5-12. In the end, Manuel Almeida, Portugal’s coach that will play in January the European Qualification for the U17 Women Championships said “I cannot hide some disappointment because we didn’t win any match on the pool phase after the good exhibitions that we had from both teams and it’s frustrating knowing that we could, or event should, be playing today for the 3rd and 4th place of this competition. Our goal was to take advantage of this tournament to provide the players with most match volume possible to the players that will play the European Championships within two weeks, and in that aspect I consider the tournament very productive. We take important lessons in the luggage that will be very helpful for our next competitive goal and that will serve as motivation to keep this attempt of reaching the international reality”.

Belgium was ranked 5th by winning 3-2 (18-25, 25-17, 25-27, 15-11) against France. In the tie-break Belgium undo a tie at 9-pts and only stopped with the final whistle from the referee. Caitlin Van de Perre, Belgium’s captain highlighted that “we are happy. We deserve this 5th place that is proof of our hard work. It’s too bad that we didn’t win the first match against Switzerland, since we would be ranked 1st in the pool and today we would be playing in the final”.

Switzerland raised the third step of the podium after winning against the spiritive Spain by a very disputed 3-1 (25-27, 28-26, 29-27, 25-21). Johannes Nowotny, Belgium’s coach didn’t hide his joy “We are very happy with the bronze medal. We weren’t expecting it, but the team believed and we won against good teams. This tournament was very good for the teams, very well organized and we liked to be here… despite the cold (laughs)”.

Netherland defeated today, in the final, Germany by 3-1 (25-18, 24-26, 26-24, 25-21) and raised the trophy of winner of the WEVZA U16 Women Tournament. The Dutch coach Eelco Beul was “very happy for the girls, because they deserved to win this tournament that had a good level and organization. I had warned them that playing a tournament is one thing and playing the final it’s totally different. We had very good moments, similar to Germany, but we also made some childish errors. It’s a team that as a lot of potential. Congratulations to Germany by the way they played and also to my team. This final will be a very important moment for the next years, but today the night is theirs and they should enjoy this victory”.