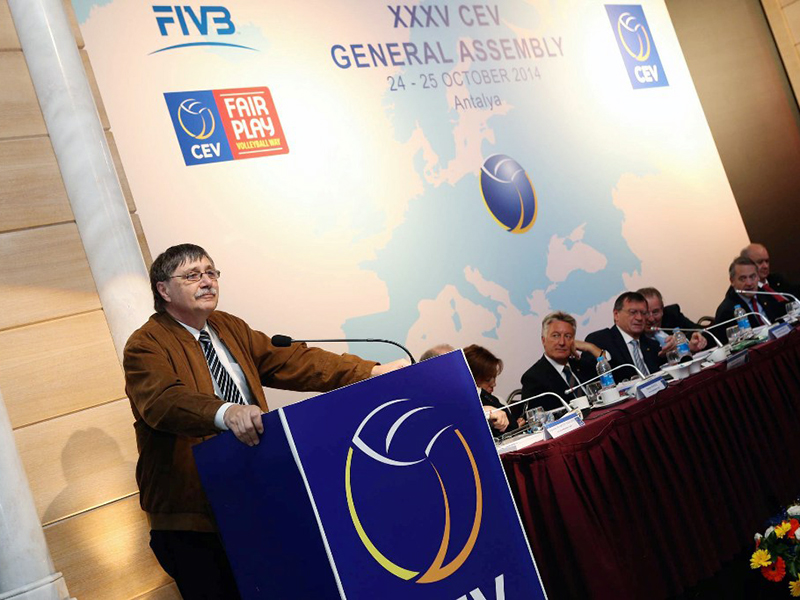 After the governing body for Volleyball in Switzerland re-started its activities almost from scratch back in 2002, Stern led Swiss Volley through its ups and downs. With his serenity and friendly demeanour he could stand the financial as well as organisational challenges that Switzerland’s Volleyball family was confronted with in the first years after the federation’s ‘re-birth’. Only cancer, after weakening him more and more throughout the past months, could prevail on him. A few days ago Christoph Stern passed away at the age of 64.

Europe’s Volleyball family and especially Swiss Volley owe much to Christoph Stern. He was the very first international Volleyball referee from Switzerland’s German-speaking community and in this capacity he attended an impressive number of international matches from 1979 through 1996. He started his ‘political’ career as chairman of the Basel Regional Council while also supervising the national teams before in 1988 he joined the Board of Administration of the Swiss Volleyball Federation. His career as international referee came to an end by the time that Switzerland’s Volleyball family was going through many problems. Stern was one of the men behind its renovation and re-organisation, first becoming interim President and then assuming the leadership of Swiss Volley in October 2002.

Christoph Stern was not only a driving force, but he was also somebody who acted as a mediator creating bridges between the old and new generations at the helm of Switzerland’s Volleyball family. “He was a sparring partner, always open to new ideas as well as to criticism. He strengthened the office’s back and was also willing to take risks. He was a friend, a good listener, even a pastor and also a long-time member of a choir,” reads an obituary on the website of Swiss Volley. “He never sought the big stage, and remained mostly in the background since it was always about the business to be discussed and not about his persona. With his collegial leadership style, his professional and social skills, he was the perfect president in a very difficult time for Switzerland’s Volleyball family,” the note continues.

Christoph Stern was one of a handful of people who helped the association re-start its work back in 2002 according to criteria of sustainable development, thereby laying the foundations for the current financial stability, operational effectiveness and sportive success of Swiss Volley.
Switzerland has become one of the world’s top 10 nations in Beach Volleyball and Volleyball has also made crucial step towards its further professionalization, even more after the country co-hosted with Germany the Final Round of the 2013 CEV Volleyball European Championship – Women.

“We are very grateful to Christoph for the outstanding work he did for our sport as he steered Switzerland’s Volleyball family through difficult times,” says CEV President André Meyer. “We will greatly miss him. Our thoughts and prayers go out to his family, relatives and friends. He has left us a way too early but we are confident that his legacy will be a lasting one for the years to come.”

Waiting for elections to follow on November 28, Vice President Bernard Hominal will be acting as chairman of Swiss Volley until this date.

Picture: Christoph Stern portrayed at the XXXV CEV General Assembly held in Antalya last October where he reported on the ongoing preparations for next year’s CEV Beach Volleyball European Championship Final to be held in Biel/Bienne