One of the main highlights of the first season of the Zonal Volleyball Association of the Western European countries had Beach Volley upcoming figures as stars of three events that set the tone of the competitions of the sand and the net in the association. The cities of The Hague in The Netherlands, Macedo de Cavaleiros in Portugal and Capaci in Italy went down in the history of the union of nations as venues of the first WEVZA Beach Volleyball tournaments.

From July 11th to July 13th, Dutch city of The Hague held the first edition of WEVZA Under 19 Beach Volleyball championship. The competition acted as the perfect preview of The Hage FIVB World Tour celebrated in the same venue only days later and certified the great level of the young players participating in the event. Boys tournament in The Hague lived an all Spanish final, as the two representatives from the southern European country met in the title deciding match. The younger side of the two duos, formed by Alejandro Huerta and Oscar Rodriguez proved its outstanding level, confirmed weeks later with the Silver medal in FIVB Under 17 World Championship, by beating Huerta-Rojas in a disputed game 1-2. The third position in the tournament ended in the hands of Dutch van Steenis / Bontrop, who won the qualification match against fellow countrymen Penninga / Bouter 2-1. 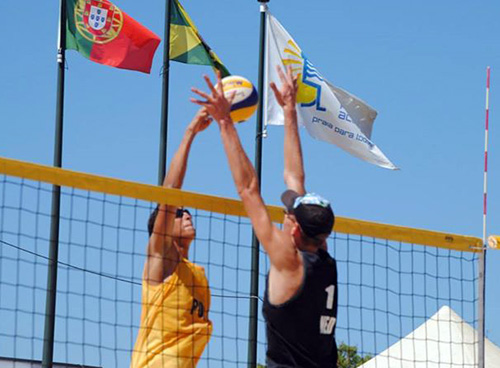 The local fans especially enjoyed the Girls competition, as local duo Daalderop / Kos finished as champions, after beating Spaniards Pascual-Ruiz 2-1 in an even clash decided by the physical prowess by Dutch young players. The Bronze medal also went to Spain, as young side Querol-Salo beat Belgium VandenDriesche / van Dycke 2-0.

The following month, Beach Volleyball action transferred to Portugal, where the WEVZA Under 21 Beach Volleyball championship took place. Aida Etxebarria / Nerea Izagirre from Spain and Jasper Bouter / Jannes Van der Ham from the Netherlands conquered the titles of the thrilling competition held at Praia da Ribeira in Albufeira do Azibo.

In Girls competition, the young Spaniards from Basque region beat 2-1 in the final to Portugal’s Paquete-Silva, while Dutch side Zwaanswijk-Bak earned the third spot by winning the 3-4 match against Portugal’s Reis-Tinoco.

The city of Palermo lived the excitement of hosting the first competition of the Zonal Beach Volleyball tour. Men’s teams from the eight nations travelled to Italian city for a weekend that opened the senior action in the sport in the association. The title stayed in Italy as locals Cecchini-Ficosecco beat Germans Poniewaz-Poniewaz 2-0. The third position in the final podium ended in the hands of Spaniards Marco-Garcia, who beat Italians Colaberardino – Michienzi in the 3-4 match.

The thrill of the best Beach Volleyball is expected to continue in 2015 with more sensational events either in under age competitions and senior tournaments.