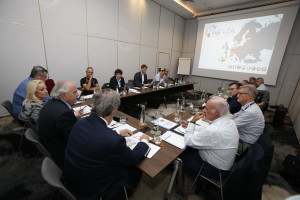 WEVZA IX General Assembly took place in the French city of Paris on September 26th 2019.
Among several subjects the Plan of Activities for 2020 as well as the budget were presented and were approved for Volleyball and Beach Volleyball.

This meeting was headed by Mr. Vicente Araújo, WEVZA President, counting with the presence of Vice-President Willy Bruninx (Belgium) and Eric Tanguy (France), the Treasurer Mr. Michel Henno (Belgium) as well as all members of this Association.