Eiholzer/Gerson and Caminati/Rossi are crowned champions in the 14th Trofeu Internacional Ciutat de Barcelona
The Swiss female couple and the Italian male one managed to take the victory in their respective finals and won the title in the first event of the Madison Beach Volley Tour 2017. 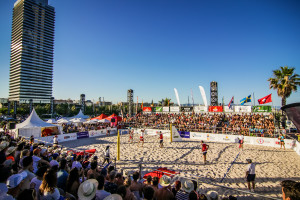 Barcelona, 2nd of July 2017- The day on Sunday assembled thousands of people in the Moll de la Marina de Barcelona and showed the great level of the couples that were participating to win the first title of the season in the Madison Beach Volley Tour 2017.

Some of the best international beach volleyball couples have gone through the central sand court during this weekend, putting the finishing touch this Sunday with a day in which we have enjoyed great level matches. 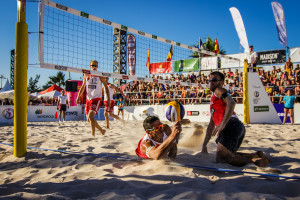 The first in certifying their classification for the final would be the Swiss players Eiholzer/Gerson, as well as the German couple Ittlinger/Mersmann, who defeated the local player Amaranta Fernández and her mate Ángela Lobato. The Spanish players were not able to win the match for the third and fourth place, and it was the couple Mouha/Gielen who finally got the bronze medal.

On the other hand, the men’s category was developing from the quarter final until knowing the finalists: the Italian couple Caminati/Rossi and the German players Bergmann/Harms, who played amazingly against the Dutch Varenhorst/Van Garderen in almost an hour. The latter would finally win the final for the third place.

At 18:00h, the female final started before more than 1.000 people that filled the stands of the central sand court placed in the Moll de la Marina de Barcelona. A match that was solved in two sets after the double 21-19 by the Swiss couple Eiholzer/Gerson. It took them 39 minutes to beat the German couple Ittlinger/Mersmann.

Next, the male couples jumped to the central sand court to play the last match of the 14th Trofeu Internacional Ciutat de Barcelona. An epic battle between the two couples in better shape: the Italian players Caminati/Rossi and the German couple Bergmann/Harms. More than an hour and points to be remembered, everything to proclaim the Italian couple Caminati/Rossi champions of the opening event of the Madison Beach Volley Tour 2017. 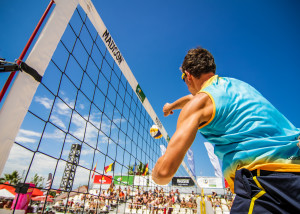 Final point to the three competition days in Barcelona. Next week, the tour moves to Valencia, where the second event of the Madison Beach Volley Tour 2017 will be held.