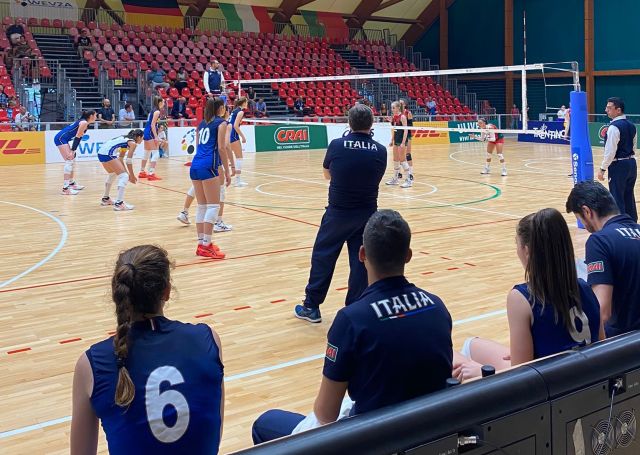 The Italian Volleyball Federation organised the WEVZA U17 Girls Tournament at Chiusi, Chianciano Terme, Italy from 3 to 7 August 2022. All teams proved their value and some matches were very balanced and played until the last set. In the end Belgium stood up on the top place of the podium for a well deserved victory, finishing the tournament without defeats. The 2nd place on the podium went to the French team that managed to keep in the fight for the top place until the last day, winning the final match against Spain. The 3rd place went to Spain, followed by the home team Italy, Germany and Portugal.

Day 1
The tournament started with the opening match between France and Germany with the French reaching an easy victory by 3-0.
Spain and Belgium were up next and after an even match, Belgium ended victorious by 3-1.
The final match of the day faced Portugal against the home team, Italy. The match went down to the last possible set in a thrilling gameplay. In the end victory went the Portuguese side, managing to win by a close 3-2.

Day 2
The 2nd day of the tournament in Chianciano Terme started with and easy victory of Begium over Germany by 3-0.
The next match of the day opposed the two iberian countries of Portugal and Spain. After and even start between the two teams, the Spanish managed to gain advantage and win the match by 3-1. The last match of the day saw France defeating the home team, Italy by 3-1 and in this way, keeping the top place of the classification.

Day 3
The 3rd day of competition started with the much awaited match between the two top teams of the classification, Belgium vs France. As expected the match went down to the tie-break with Belgium beating the French squad by 3-2 and moving to the top of the classification.
The following match facing Germany and Portugal was a straight forward win for Germany by 3-0.
The final match of the day between Spain and Italy was also going to be an even one and it proved to be. Both teams played a balanced 5 set match with victory going to Italy in the last tie-break set by 22-20, winning by 3-2.

Day 4
The 4th day of competition started with an easy victory of Spain over Germany by 3-0, followed by the match France vs Portugal, which ended also with a 3-0 vixtory of France over Portugal. The final match faced the home team against Belgium. Italy got a good start winning the 1st set, but eventually the Belgium strong gameplay decided the score in its favour, winning by 3-1. All will be decided in the last day of the tournament in Chianchiano Terme, Italy.

Day 5
The final day saw Belgium winning 3-0 against Portugal and managing to get the 1st place on the podium wihtout defeats. France conquered the 2nd place winning against Spain by 3-1 and Spain was placed 3rd. The home team Italy imposed a victory against Germany by 3-1 on a well played match.