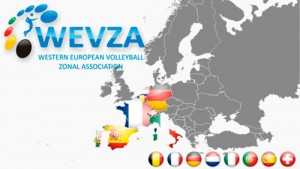 The Western European Volleyball Zonal Association (WEVZA) has been founded as a supporting institution of the FIVB and CEV, pursuant to the FIVB Constitution and is composed by the National Federations of Belgium, France, Germany, Italy, Portugal, Spain, Switzerland and The Netherlands. The WEVZA shall pursue, in the geographical area assigned to it, the aims of the CEV and FIVB which are primarily to encourage the development of Volleyball and Beach Volleyball.

The main Aims and Tasks of WEVZA are:

The General Assembly of the affiliated member NFs is the supreme decision-making body of WEVZA and its decisions are binding for all Member Federations and have immediate effect on all matters and activities under the Associations authority. The General Assembly is composed of representatives from the NFs members and will be held every year.

The Executive Committee is the governing body of WEVZA and it is responsible for the overall administration of the Association, as well as of the implementation of the resolutions of the General Assembly. The Executive Committee consists of three [3] members: the President and two [2] Vice Presidents. For the second term of the Association, the persons appointed for such positions are:

The General Assembly may create as many Commissions as necessary, which shall be responsible for delivering the stated aims of WEVZA.